One of Gwlad’s policies is to to improve the road and rail infrastructure linking the north and south of Wales.

Wales already has strong east-west rail connections, but the only north-south route requires a circuitous diversion through England.  The geography of mid-Wales makes it difficult to travel north-south, but it is not impossible, and there are a number of disused railway lines in mid-Wales which could be reinstated to create a new north-south rail route.

There is an ongoing campaign to reopen the former Carmarthen-Aberystwyth railway line which could potentially create a north-south route extending along the west coast of Wales to Caernarfon and Bangor. While this would be beneficial to local communities, it does not really provide much of a strategic improvement to Wales as a whole, and an alternative route could be developed which would link the more populous areas of north-east and south-east Wales, and connecting the existing North Wales Coast Line and the South Wales Main Line. 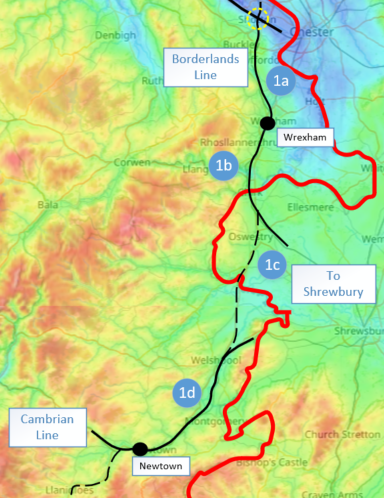 The north-south route would start at Shotton, where the ‘North Wales Coast’ line crosses the ‘Borderlands’ line, but where the lines do not currently connect. There is no space available to construct a curve junction to the south west of this intersection, but there is space to construct a loop to the north-west, which would allow a direct connection between the coast line towards Wrexham for the first time.  The line speeds on this route are currently poor, but plans are already in place to improve this line as part of the ‘North Wales Metro’ proposals; fast through trains would no longer stop at intermediate stations.

Improved signalling and platform arrangements at Wrexham General would then allow trains to continue south on the existing Wrexham to Shrewsbury line as far as Gobowen.

The route would then follow the line of the former ‘Cambrian Railway’ between Gobowen and Welshpool, which would be reinstated including reopening the former station at Oswestry.  Some of this section is of course in England but you’d never know it without looking at a map – when you’re there, it looks and sounds Welsh. Part of this route is currently used by a heritage railway and this would need to be relocated.

The north-south route would continue along the existing Cambrian line to Newtown, which would become an interchange station between the east-west route Cambrian Line routes and the north-south route.  Through trains could also now travel along this route from Aberystwyth to Wrexham and beyond. 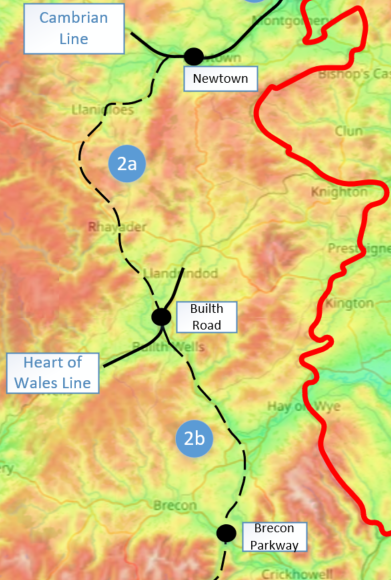 A few miles west of Newtown, the north-south route would turn south through Llanidloes and Rhayader following the line of the former ‘Mid-Wales’ railway which would be reinstated. This section of line around Llanidloes contains some steep gradients and tight curves and some engineering interventions (i.e. new alignments, bridges, tunnels) may be needed here to maintain a faster line speed.

This section of line connects to the existing Builth Road station allowing connections to the Heart of Wales line.

South of Builth Road, the route continues along the reinstated ‘Mid-Wales’ railway through Talgarth to Talyllyn in the Usk Valley. A new station could be created here to serve the area between Brecon and Crickhowell, tentatively named ‘Brecon Parkway’. 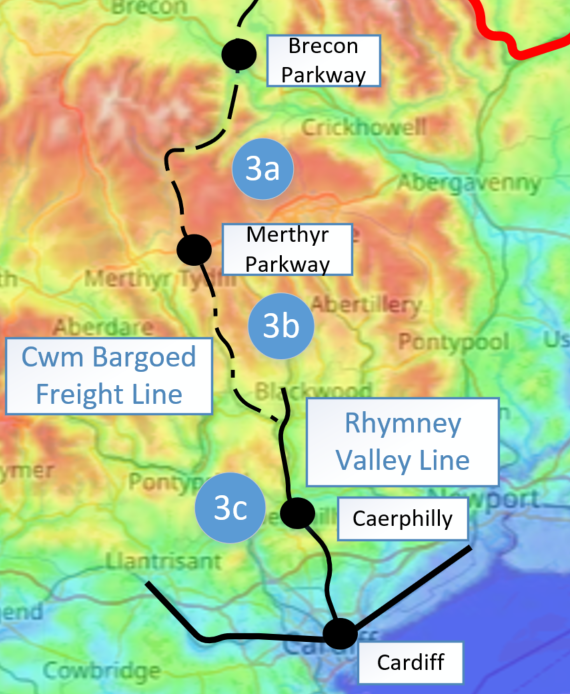 The line south would then follow the route of the former ‘Brecon & Merthyr Tydfil’ railway to Talybont and then up into the hills through Dolygaer to Dowlais.  This section of line – although very scenic – contains some steep inclines and tight bends and would again require some engineering interventions to ensure a safe and reliable route (this section of line used to be known as the ‘Breakneck and Murderous’ railway). There is also another heritage railway – the Brecon Mountain Railway – which uses some of this route and again it would be necessary to relocate this railway.  At Dowlais Top, a new ‘Merthyr Parkway’ station should be built alongside the A465 Heads of the Valleys road, with rail-bus connections to nearby Merthyr Tydfil, Rhymney and Ebbw Vale Metro stations, and which would provide an alternative commuter route to Cardiff.

A few miles south of Dowlais, the route would join the existing ‘Cwm Bargoed’ freight line, before joining the existing ‘Rhymney Valley’ line at Ystrad Mynach.

Taking an example route of Llandudno Junction to Cardiff, this currently takes 3hrs and 40 minutes, or 220 minutes (fastest service) via Shrewsbury and Newport.

The new north-south route should take:

This route provides only limited improvements in end-to end journey times from Llandudno Junction to Cardiff but offers significant improvements in connectivity on alternative routes – for example Aberystwyth to Cardiff improves from 4hr 50 mins (fastest) to 3hr 15mins.

Towns such as Oswestry, Llanidloes & Rhayader regain their railway services, while Brecon and Crickhowell are served by a nearby Parkway station which is less than 1 hour from Cardiff, and should become a focal point for tourism in the National Park.

The Merthyr Parkway station would act as the focal point for ‘transport-led’ development in the Heads of the Valleys area.

The proposed reinstatement of the 45 mile Aberystwyth to Carmarthen line has been estimated at around £1 billion, and on that basis the new 70 mile Merthyr to Newtown and 18 mile Welshpool to Gobowen reinstatements should be in the region of £2-3 billion pounds.

To set that in context, approximately £5 billion of the cost of HS2 is being deducted from the Welsh Government’s budget, even though not a mile of it will run through Wales. Indeed, while the Westminster government justifies this on the basis that journey times from North Wales to London may be marginally reduced by it, its effect on the Cardiff economy is likely to prove strongly negative because competing cities like Birmingham and Manchester will be made relatively much closer to London.

A new railway route linking the north of Wales with the south, almost entirely within Wales, would provide significant and strategic benefits to large parts of Wales. This can be developed at significantly lower cost than the huge sums we are forced to contribute to the HS2 railway in England which brings zero net benefit to Wales.

Not all of the ideas in the above are original. Both Gareth Dennis and Mark Barry have written extensively on this subject, and their work is hereby acknowledged. It’s well worth reading their own blogs (via the hyperlinks given with their names) to find out more of their thinking on this topic.