In Wales we’ve never been great ones for building statues. I’m struggling to think of statues portraying any prominent Welsh heroes which were unveiled before those of Thomas Charles in Bala (1875) and Daniel Rowlands in Llangeitho (1883).

Prior to the completion of the Marble Hall in Cardiff City Hall in 1916 – financed by prominent industrialist and Liberal politician D.A. Thomas (Lord Rhondda) – it’s doubtful that there had ever been statues made of Hywel Dda, Llywelyn II, Owain Glyndŵr or William Williams Pantycelyn.

Therefore during the iconoclastic summer that’s just passed, few Welsh statues have been in the firing line for supporters of Black Lives Matter – beside that of Thomas Picton, whose name few contemporary Welsh people would have recognised in any case.

What are we to make of it, though, when people who have real significance for the Welsh national movement, whether there are statues of them or not, come under attack from the radical Left?

Of Arson and Rugby

This last week has seen attacks made upon some real icons of the Welsh national movement. First we had the revelation that Cymdeithas yr Iaith Cymraeg (the Welsh Language Society) – as well as throwing allegations at us that we were  ‘far right’ (and then not being able to provide any evidence when challenged) – had airbrushed Saunders Lewis right out of their history, referring to him merely as “a leading academic”.

For those who don’t know, Saunders Lewis was a leading light of the Welsh nationalist movement throughout the early and mid 20th Century. In 1925 he and five others (Moses Griffith, Fred Jones, H.R. Jones, Lewis Valentine and D. Edmund Williams) formally inaugurated Plaid Genedlaethol Cymru, the Welsh Nationalist Party, which later dropped the middle word from its name to become “Plaid Cymru”. In 1936 he, along with Lewis Valentine and D. J. Williams, set fire to the military academy which was under construction at Penyberth in Pen Llŷn, handed themselves in and were imprisoned for nine months. One of the most significant intellectuals in Welsh-speaking life throughout the 40s and 50s – though sometimes suspected of excessive sympathy for Fascist movements in Europe, particularly Mussolini in Italy and Franco in Spain – his 1962 radio lecture “Tynged yr Iaith” (the Fate of the Language) led directly to the formation of Cymdeithas yr Iaith the following summer.

Then, over this weekend, the surprise victory of Argentina over the All Blacks at rugby sparked a whole new controversy over the role of Michael D. Jones.

He was the prime mover behind the establishment of ‘Y Wladfa’, the Welsh-speaking community in the Chubut Valley of Patagonia, in the 1860s. Thousands of Welsh-speaking people, despairing of being able to continue their way of life under increasing English encroachment in their own country, moved to Patagonia with the full consent and collaboration of the Argentinian government, on the understanding that if the population of the territory grew to 20,000 then the government would grant it autonomous status and allow it to be administered as a Welsh-speaking province in its own right. That dream was never realised – only about 5,000 from Wales ever made the crossing, and the Welsh population was later overwhelmed by arrivals from elsewhere, though it has retained something of its identity. 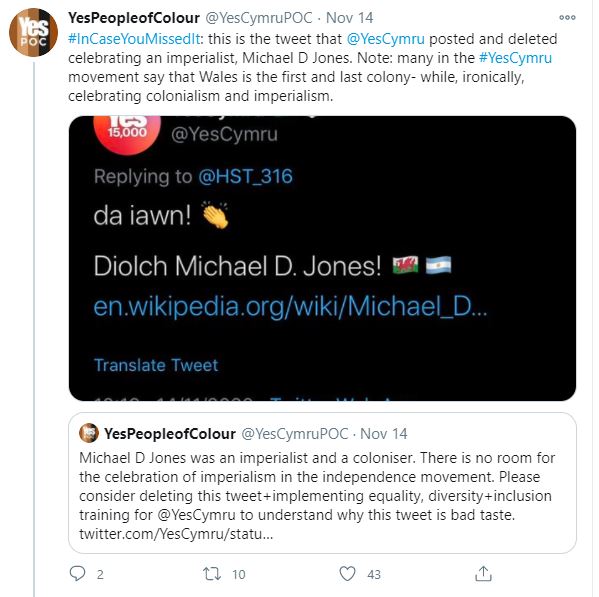 Anyway, a light-hearted tweet from Yes Cymru congratulating Michael D. Jones for his contribution to Argentina’s rugby prowess resulted in a thundering response from ‘YesPeopleOfColour’ denouncing Michael D. Jones as ‘an imperialist and a coloniser’. The official Yes Cymru account wasted no time in rolling over and deleting the original tweet, and Twitter has been… well, not exactly ablaze, but smouldering a little with a discussion about whether Jones’s plan to help Welsh people move to land which had once been populated by native Tehuelches belongs in the same category as Cortés massacring the Aztecs.

What are we to make of all of this?

The first thing to say is that it is a one-way ticket to disappointment if we expect people from previous generations to think along the same lines and possess the same sensibilities as our contemporary world. In reality, they swam in the intellectual currents of their own times as surely as we all do in the currents of ours. This phenomenon was well-described by C.S. Lewis, as I’ve quoted in these pages before, in his defence of the importance reading old books:

“…the only palliative is to keep the clean sea breeze of the centuries blowing through our minds, and this can be done only by reading old books. Not, of course, that there is any magic about the past. People were no cleverer then than they are now; they made as many mistakes as we. But not the same mistakes. They will not flatter us in the errors we are already committing; and their own errors, being now open and palpable, will not endanger us. Two heads are better than one, not because either is infallible, but because they are unlikely to go wrong in the same direction. To be sure, the books of the future would be just as good a corrective as the books of the past, but unfortunately we cannot get at them.”

We’d do well to bear this in mind. Are there ideas held today, accepted and promoted without question by the self-appointed gatekeepers of our culture’s moral code, which will utterly appal people in future centuries because of their unthinking barbarity? There must be.  Sticking my neck out quite a long way (this is Stephen Morris speaking, not Gwlad policy), I’d pinpoint the matter-of-fact acceptance of abortion: the state-sanctioned ending, every year, of hundreds of thousands of human lives, a disproportionate number of them being female lives belonging to non-white ethnic groups. All of them matter.

I’m sure there are others besides. If we could only get at the books of the future, it would be an eye-opener for all of us.

So were there ideas held by Saunders Lewis and Michael D. Jones that should make us feel uncomfortable today? Undoubtedly.

Jones is probably the easiest to defend – by the standards of his day, he was considered a bold opponent of imperialism and colonialism, as a read through his Welsh-language entry on Wikipedia, far more detailed than the English-language one cited by Yes Cymru, makes very clear. Nonetheless, it’s unlikely that he lay awake at night worrying about the fate of the native Tehuelches, rather accepting the Argentine government’s assertions that the Chubut Valley was an unsettled Terra nullius.

Saunders Lewis is a harder case. A strange fish by anyone’s standards, he had rejected the nonconformist faith of his father and grandfather (both Calvinistic Methodist ministers) to become a Roman Catholic (as did another prominent contemporary of his within Plaid Cymru, the former Quaker H. W. J. Edwards). Wanting to see Wales re-incorporated into a Europe-wide agrarian Catholic civilisation, he undoubtedly harboured more sympathy for European fascist movements than would make anyone feel comfortable today, and he had particularly venomous views towards certain Welsh Jews, such as Leo Abse, whom he saw as upholding the English establishment in Wales. The only part of his political philosophy which has made it into Gwlad’s framework of thought is his principle of ‘Perchentyaeth’, a belief in distributing the nation’s assets (particularly land) among the people, which lives on in Gwlad’s commitment to a Citizens’ Income.

Yet his contribution to the Welsh national movement in the 20th Century is incontrovertible, having been instrumental in the establishment both of Plaid Cymru and Cymdeithas yr Iaith and being among the first to serve a prison sentence for his commitment to the national cause. How can we acknowledge that, even celebrate it, without implying that we approve of everything else he ever said and did?

In this respect it’s necessary to exercise some discernment and, it must be said, maturity. We ourselves shouldn’t be blind to the faults and blind-spots of our forebears, especially the ones that we admire. But the mere fact that they had faults and blind-spots must not mean that we have to reject everything they said, did or thought in the quest for an absolute purity of mind as judged by modern standards – or in practice, as judged by those who set themselves up as the judges and juries to enforce those standards.

If we fail to get this right, then the whole of our history and culture becomes a Terra nullius. Anyone, from near or far, could then plant ideas, morals and principles whose destructiveness may not be recognised for a generation or more, but which will overwhelm us as surely as if nothing or no-one had occupied that territory before.

Wales is what she is today because of her history: the good and the bad. There is enough good to make people want to come here from all over the world, from many different cultures, and they are welcome. But they must take us as they find us, for Wales without a past would be a nation without a future.

One thought on “Attacking our Icons”