The biggest challenge that we are faced with when talking about an independent Wales is how we can pay our way.  Accurate data is difficult to obtain, but in August the Wales Governance Centre published its Government Expenditure & Revenue Wales Report (GERW) which tries to give us a clear estimate of how much we generate in taxes and spend on government services.

At first glance, the headlines from this comprehensive report look worrying. They state that government expenditure in Wales currently exceeds revenue raised in Wales by £13.7 billion, equivalent to 17% of GDP.

This deficit is clearly unsustainable and would require massive tax increases and/or cuts in spending, which would strangle an independent Wales at birth.

But this report tries to assess our current situation, and as stated, it does not represent the status of an independent Wales, and there are some interesting figures in the report which should give us some opportunities to improve our financial position.

One if the biggest issues we currently face is the lack of control we have over UK government expenditure. Spending decisions are made in London and we are just expected to hand over our share of the costs. Taking the example of HS2, this is currently forecast to cost over £60 billion which Welsh taxpayers are expected to contribute around 5% but for zero benefit.

The GERW report breaks down how much we in Wales contribute to UK spending, and while much of it seems fair and justifiable, this is not always the case. 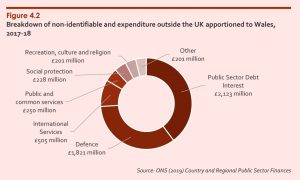 The GERW report states that included within the total UK expenditure ‘for Wales’ of £40.8 billion is the sum of £4.8 billion for ‘non-identifiable and expenditure outside the UK’ – this is expenditure made at a UK level ‘on our behalf’ and the costs shared in proportion to our population. This is broken down as follows:

Lets consider each item in turn:

An independent Wales will need a defence force, but it does not need Trident missiles, aircraft carriers and battle tanks!  A modest force similar to Ireland could be provided for around £600 million, all of which would be spent in Wales – unlike the current arrangement.

This refers to overseas aid. As worthy a cause as this is, we will not be able to afford this so this should be cut in full.

It is not clear, but I think this refers to the cost of government itself – Westminster & Whitehall.  I believe that this figure can be cut by 50% but without any specific justification, to £125 million.

This is primarily the costs of paying UK pensions abroad. While the cost of this is shared on a population basis, the reality is that Wales has fewer wealthy pensioners retiring abroad than the wealthier parts of England, and I suggest reducing this amount by 50% would be more realistic.

This is mainly the cost of the BBC including the World Service.  Wales will need its own broadcast media, in both English & Welsh, and in particular a national news service. However, it is difficult to justify this continued level of expenditure, and I propose an annual budget of £100 million.

This is not defined, so for now I will leave this amount of £202 million as a contingency.

This is a large amount which is due to UK governments failure to balance its books in the past, but represents an opportunity for us to make significant savings going forward, and I estimate we could reduce this amount siginificantly.  Read on:

When Wales leaves the UK we will need to negotiate a settlement which takes account of the existing debts, liabilities and assets of the former UK. We are not the first country to secede from another country, and there are rules established for dealing with this known as the Vienna Convention on Succession of States.

Put simply, Wales would be responsible for a share of the debts of the former UK in proportion to its population, so around 5%. But it would also be entitled to an equivalent share of its assets, including a share of the Trident fleet, HS2, Central London property estate, overseas embassies etc.

Where assets can not be easily distributed, then Wales would be entitled to an equivalent reduction in its share of the debt liability. Due to the practical limitations on distributing fixed assets, I believe that Wales can significantly  reduce its share of the National Debt – and so its responsibility for debt repayment. This needs some further detailed analysis but I estimate that this will be of the order of 50%!

Based on the figures above, we should be able to immediately reduce our fiscal deficit by around 3.1 billion – simply by becoming independent!

There are also other opportunities for reducing costs – especially in Social Protection where we appear to be carrying a disproportionate amount of Social Housing Costs as well as funding England’s retirees.

We now need to build on the excellent work carried out by the Wales Governance Centre and develop it into a fully-costed budget for an independent Wales.