In the last decade a great deal of money and effort went into building what was promised to be a new town centre for Llanelli. Large numbers of domestic and commercial properties were demolished to make way for the new and prosperous town centre, the “East Gate”.

Guess who now owns the East Gate? It’s a massive property leasing operation, “Standard Life Aberdeen”. How did land and assets originally belonging to the people of Carmarthenshire and enriched with local public money and government grants with end up in the £545 billion portfolio of a FTSE 100 company based in Edinburgh?

Upper Park Street (which was compulsorily purchased for the development) and the Island House Pub (which was sacrificed for parking spaces) were parts of the town which should not have just been sacrificed to make money for companies with no interest in, or affinity with, Llanelli.

The mystery is why? Did Council Leader Meryl Gravel know that the plan presented to her by her charming Chief Executive, Mark James, was basically one to give away the new build to the developers who would then sell it on for a huge profit?

The developers, Henry Davidson Developments, were a private company not registered at Companies House and based in Nottingham. They had built care homes and a doctors surgery in the past in England. They had never built a town centre development. Why they were chosen is a mystery. Were they friends of Mark or Meryl? 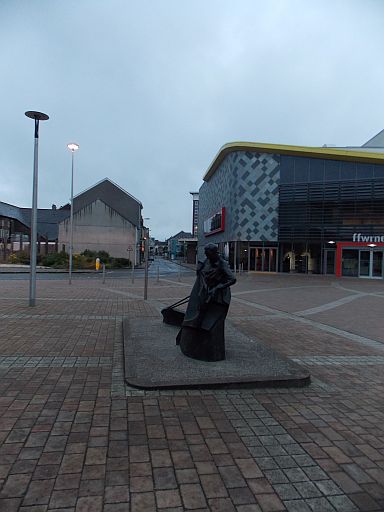 Despite the large amount of financial support from the Council, including several large grants for town development, HDD were then gifted the land in total by the Council. The Council paid them £4 million pounds to build the Hotel/Call Centre Office/ Shops and Restaurant building. When the call centre idea fell through, the Council agreed to pay a total of £5 million for the lease of the open plan office building over 20 years. They then had to refit it to make it usable for County Council Staff, who needed offices where they could work with a degree of privacy and without disturbance. The refit is said to have cost in the region of £350,000, and to have left the County Council with a surplus of office space. The office block is below a hotel and sits on shop and restaurant premises.

The whole lot, buildings and land, was sold on to Standard Life by Henry Davidson Developments in 2015, for the sum of £14 million pounds, so our council saw our money disappearing with HDD back to Nottingham with a huge profit. The County then still had to pay the office rent of a quarter of a million pounds every year, after it had already spent many millions of public money, and the English Developer, HDD, had made a great profit. It was Llanelli’s loss. The shop units have never been fully let and the current downturn will surely worsen the situation.

Standard Life Aberdeen is in some distress. The chief Executive, Keith Skeoch, has just stood down. The Company’s chair, Douglas Flint, warned on Bloomberg TV this month about the coming economic downturn and actually advised investors to try Asia as a better bet than Europe.

The Eastgate Plan was probably devised by the then Council Chief Executive Mark James; the current Council Chief Executive, Wendy Walters, was in a senior post in the “Regeneration” Department that ran the project. She then served for some time as Mark James’ deputy. I remember her talking to me and other County Councillors a few years earlier when plans for a cinema and housing estate were being considered for another site, explaining that “Retail” was dead but “Leisure” was the way to produce jobs and prosperity.

It is their senior elected councillors, the “Executive Board” who are legally responsible for these decisions. No-one is likely to challenge them as the County councils have almost bottomless pockets when it comes to defending their mistakes in court. Unfortunately few of these individuals have had the wit or the guts to argue with the unelected senior council officers in Carmarthenshire.

So the story is that our Executive County Councillors led by Meryl Gravel gave away the Eastgate to a firm they did not seem to know and who made a multimillion profit out of us. Now the area is owned by a huge company, Standard Life Aberdeen who may be in financial difficulties – certainly their share price has recently halved. Hopefully, with billions of pounds’ worth of investments, Standard Life Aberdeen won’t go bust, but the local people have no power over what happens next to their new town centre because their own elected councillors “gave it away”, possibly without even knowing that they had done so. Henry Davidson Developments are still based in Nottingham and doing well.

We have wasted a lot of public money making companies – that aren’t even based in Wales – rich. It’s time that our County Councils spent their money more wisely. How many end up like Llanelli, not even owning the new town centre development they built?

We hold out the begging bowl and our so-called leaders throw the pennies away!

3 thoughts on “The Sad Tale of the East Gate”