As I write this, the outcome of the Brexit process is still anyone’s guess, with the Westminster parliament having just voted to rule out a ‘No Deal’ whilst having done nothing to address the fact that this will still be the outcome unless, between now and 29th March, they either agree a deal or else delay or revoke Article 50. It seems abundantly clear now that there’s not going to be a deal; delaying Article 50 is not going to make one magically appear.

Revoking Article 50 or having a sham second referendum would be such a repudiation by Parliament of its duty to represent the wishes of its electors that it takes us into dangerous territory. When the chips are down I don’t believe that even the most rabid Remainers will be ready to step into that particular abyss. Therefore my money is still on No Deal, if not on 29th March then later in the year – possibly after handing an extra £1 billion a month of taxpayers’ money to the EU in the meantime. As my colleague Aled Gwyn Jôb has so eloquently written elsewhere, nothing could be better evidence of Westminster’s unfitness to govern Wales.

At the sharp end

Writing in the Spectator last week, Martin Vander Weyer posed the question “What’s the worst line of business you could be in, if we’re heading for no deal?” His conclusion:

“Not finance, for sure: there’s a noticeable absence of squealing from the City, which has evidently made all the contingency plans it needs to continue making numbers dance on screens and booking the proceeds in convenient domiciles. Car manufacturing clearly has its challenges — but the impediments of Brexit are no more than a tiresome sideshow compared to the industry’s wider technological and market issues. Fishing has been a bad career choice ever since we joined the Common Market and probably can’t get much worse. But the one thing you really wouldn’t want to be right now, I suggest, is a sheep farmer.”

Vander Weyer was concerned about his neighbours on the North York Moors, but it’s obvious that Welsh sheep farmers are every bit as much in the firing line. They may not be great in number, but they form the backbone of the agricultural economy over large areas of the country, creating one of Wales’s most recognisable and reputable exports whilst safeguarding both the landscape and the culture of much of our rural heartland. To allow them to bear the brunt of the crass incompetence of the Westminster government would be totally unacceptable, and the Welsh Government needs to step in to protect their interests by providing whatever transitional assistance may be necessary to keep the industry on its feet.

Someone else has been here before

Yet the situation is not without precedent.

New Zealand has gone though something very similar to what Wales is faced with. Before the UK joined the Common Market (as it then was) in 1973, it was by far the biggest market for New Zealand’s agricultural exports, taking a similar proportion of New Zealand’s exports as the EU currently takes from Wales. As a Crown Dominion and member of the Commonwealth, New Zealand enjoyed privileged access to the UK market which was withdrawn overnight when the UK joined what is now the EU.

The dislocation in the New Zealand farming industry was dramatic, and despite some success in striking new trade deals with Australia and Japan the industry depended heavily on government subsidies to keep it afloat. By the early 1980s subsidies made up 40% of farm incomes in some areas,  and the situation was becoming unsustainable. Something had to give. 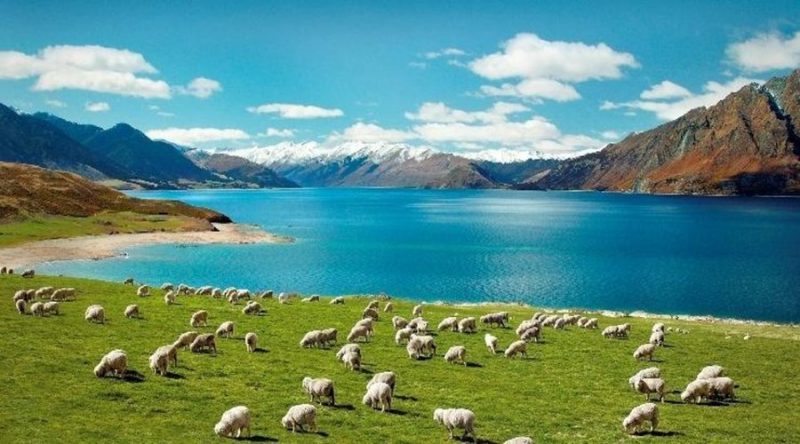 What gave was the subsidy. In 1984 the New Zealand Labour government abolished all farm subsidies, including the ones that had been brought in to support farmers after their loss of access to the UK market.

So New Zealand agriculture collapsed, with farmers leaving the industry, pastures becoming overgrown with first nettles and then trees, and the rest of the New Zealand economy wilting as it lost one of its key exports….?

Well no, not exactly. New Zealand lamb exports reached a new record high in 2018, with the New Zealand farming industry being one of the efficient and prosperous in the world. Ask a New Zealand farmer whether they’d like to go back under a subsidies regime and the most likely reaction is mute incomprehension. Exports to the UK, once over 50%, are now less than 5% as New Zealand has aggressively expanded its market throughout Asia and in particular (obviously) China. “Well,” someone might say, “China is on New Zealand’s doorstep; it’s far too far away from Wales to be a serious export market for us.”

In fact, the distance from Wellington to Beijing as the crow flies is 6,733 miles; from Cardiff it is 5,149 miles.

Meanwhile they have diversified their agriculture with the production of other commodities such as venison and wine, while increasing the proportion of food exported as value-added packaged produce rather than as raw material – all the time guarding and building their brand and reputation.

That’s not to say that everything was plain sailing. It took until the early 1980s for New Zealand’s economic growth to return to pre-1973 levels, and in the immediate aftermath of the withdrawal of subsidies many farmers did indeed lose their livelihoods, with farms being bought up by others who had more ready access to capital.

What Wales needs to do is to learn from New Zealand’s experience and give our agricultural economy the focus it deserves. In the first instance, government policy on farming needs to put food production first and foremost, ensuring that Wales’s brand is synonymous worldwide with top quality food produced to the highest ethical standards. We must have no truck with those who seek to colonise or re-wild our upland areas, driving out working farmers in favour of tourists or wildlife.

Secondly, there needs to be long term investment – not subsidy – to bring new blood into Welsh farming, providing opportunities to the children of existing farmers and bringing other young Welsh people into the industry. Training needs to be provided in international best practices, and technologies such as those that track animals and monitor their condition and well-being, and monitor the condition of growing arable crops, should be adopted. Financial structures must be put in place to enable farmers to leverage the value of their land for capital investment without jeopardising their ownership of it, and for newcomers to take up farming without needing to have their own capital to buy land.

Thirdly, Wales needs its own school of veterinary medicine.

These and other policies can be found in our Manifesto: policies which will work to Wales’s benefit whatever the outcome of Westminster’s chaotic Brexit may be.