In the good old days of the 1960s and 70s, the UK Government totally ignored the Welsh border when establishing public bodies. We ended up with cross border institutions such as Merseyside and North Wales Electricity Board (MANWEB) and the Post Office assigning Shrewsbury postcodes to much of mid-Wales.

The water industry was no different and when the water industry of Wales and England was reorganized in 1973, the Welsh National Water Development Authority (WNWDA) was established to provide water and sewage services across most of Wales.  However, it did not cover all of Wales, with north east Wales covered by the private Wrexham Water company and Montgomeryshire covered by the new Severn Trent Water Authority. WNWDA was bizarrely also responsible for much of Herefordshire in England. 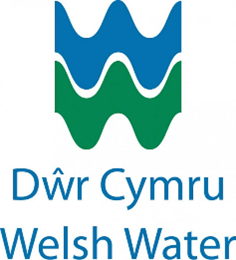 WNWDA was later privatized in 1989 as Welsh Water and then following a takeover of the South Wales Electricity Company (SWALEC) became the multi-utility Hyder.  However Hyder suffered financial difficulties and was eventually broken up, with the water business re-established in 2001 as the ‘not-for-profit’ Dŵr Cymru.  This has proven to be a successful and sustainable business model and continues to this day.

Meanwhile the privately owned Wrexham Water company purchased adjacent Chester Waterworks in 1994 and became Dee Valley Water. This was in turn taken over by Severn Trent plc (the now privatized Severn Trent Water Authority) in 2017.  To give due credit to Severn Trent they appear to have recognized the realities of devolution and in 2018 established a new subsidiary company – Hafren Dyfrdwy to combine its water supply business in Wrexham and Montgomeryshire under one umbrella. This new Company based in Wrexham follows the Welsh border with the previous Dee Valley Water consumers around Chester transferring to Severn Trent, and all Welsh consumers now covered by Hafren Dyfrdwy.

But in addition to supplying Welsh consumers there is also a large water infrastructure operation in Wales which supplies English consumers: 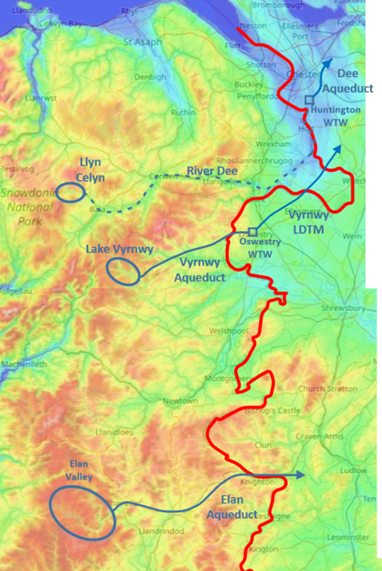 The Elan Valley consists of a series of connected reservoirs built between 1893-1904 and then extended further between 1946-1952 by the Birmingham Corporation. The reservoirs are operated by Dŵr Cymru and supply 300 million litres/day of water via the 116km long Elan Aqueduct to Severn Trent for supplying the Birmingham area.

This reservoir was built in the 1880s by Liverpool Corporation and is the largest lake in Wales, albeit artificial. The reservoir is operated by Severn Trent and supplies 252 million litres/day via the Vyrnwy Aqueduct to a water treatment plant near Oswestry in Shropshire. The water is treated and then transported by the Vyrnwy LDTM pipeline to United Utilities (the water and electricity supply company for north-west England) for supplying the Merseyside and Cheshire area.

The Llyn Celyn reservoir was built by Liverpool Corporation between 1960 and 1965 and is infamous for drowning the Tryweryn valley and the village of Capel Celyn.  Now operated by Dŵr Cymru It is used to regulate water flow into the River Dee via its tributary the Tryweryn, with water extracted downstream from the River Dee near Chester by United Utilities at its Huntington treatment plant, where it extracts 566 million litres/day. This water is then taken by the Dee Aqueduct to supply the Merseyside and Cheshire areas.

The Economics of Water

In 2020, Severn Trent made a profit of £568 million based on a turnover of £1,843 million – a very healthy 31% profit margin. In the same period, United Utilities made a profit of £492 million on a turnover of £1,860 million – a relatively disappointing 26% margin.  Despite the primary resource for generating this turnover and profit coming from Wales, none of the Corporation Tax or Value Added Tax associated with this business is attributed to Wales.

Between them, Severn Trent and United Utilities extract more than 1,100 million litres of water a day from Welsh reservoirs. The selling price to consumers of this water is around 0.15p/litre – so the sales value of this Welsh water is worth £600 million year (1,100 million x 365 days x £0.0015) – for which I believe Natural Resources Wales receives the princely sum of £2.5 million/year.

If Wales were to charge a modest extraction fee of 0.05p/litre this would generate an income of £200 million per year. A fairer market rate may be closer to 0.1p/litre which would generate an annual income of £400 million. This is a substantial sum, but by itself is not enough to correct the structural deficit in the Welsh economy. However if this money was placed in an Infrastructure Development Fund and used to fund strategic capital infrastructure projects it could have a huge impact on our economy in the medium term.

The current arrangements represent gross profiteering from the Severn Trent and United Utilities water companies and blatant theft of our natural resources, but we can not currently do anything about it – the  devolution settlement specifically excludes water resources and you can see why.  The only way to resolve this situation is to scrap devolution and move to full independence.

4 thoughts on “The Welsh Water Industry”