The idea that independence for Wales or Scotland must be mandated by a referendum has gained currency and become most people’s assumption, but in fact there’s no legal or historical basis for it.

There was no referendum in the case of Irish independence in 1922; nor in the cases of Canada, South Africa, Australia or New Zealand, the last of these being in 1947. In fact, of the 62 countries that have become independent from the UK since the Second World War, only one – Malta – did so following a referendum – and that, for what it’s worth, was in fact a second referendum happening eight years after it had voted against independence in an initial referendum (1964 and 1956 respectively). More recently, there were no referenda when the Baltic states left the Soviet Union in 1991, nor when Slovakia separated from Czechoslovakia in 1993.

According to House of Commons research, “as a matter of law, a referendum is not required for Scotland to become independent“.

The normal process for a country to become independent is that a negotiated settlement is reached between a recognised entity (a government or other legitimate representative) from the new country and the government of the former ruler. Occasionally – as was the case with Norway’s independence from Sweden in 1905 – a referendum is held after the agreement of independence terms in order to validate the outcome, but even this is the exception rather than the rule. The important elements are:

In Scotland’s case, (1) is clearly fulfilled. No-one can seriously argue against the assertion that the SNP government, whatever its failings, is the legitimate elected government of Scotland. In both countries’ cases, however, (2) is clearly lacking; under current circumstances, both countries have a large fiscal deficit which leaves them dependent on subsidies from English taxpayers in order to cover their public sector expenditures.

Therefore the real requirement for Scotland and Wales to achieve independence has nothing to do with winning a referendum. It is for Wales to overthrow Labour and elect a pro-independence government, and for both countries to achieve a level of economic growth – exceeding that of their expenditures – that will close their fiscal deficits. 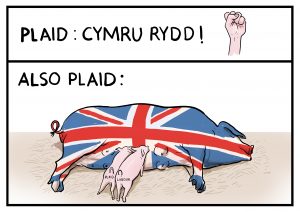 Clearly Scotland has the advantage over Wales so far, in having overthrown Labour already. Opportunities like 2007 don’t come along very often, and Plaid Cymru’s bone-headed, pusillanimous and venal caving-in to Labour – upon which, incredibly, they doubled-down after the 2021 election – has undoubtedly left Wales in a position where it needs to catch up.

The ray of light, giving cause for optimism, is that in the meantime it’s been shown that Labour can in fact be beaten in Wales by an insurgent right-of-centre party. The result in the Euro elections of May 2019, which saw the Brexit Party as clear winners and Labour pushed back into a distant third place, shows what’s possible – though again, this came about due to a very specific set of circumstances:

Who’s to say when similar conditions may arise again? At the time of writing, the Conservatives are in the midst of a leadership election and Labour are consistently failing to gain any traction in the UK-wide polls. There seems little prospect of Plaid Cymru, having once again doffed their caps to Labour and taken a junior rule in the Senedd, ever being able to leapfrog them. But if we in Gwlad can get ourselves into the role that the Brexit Party had in 2019, then anything’s possible.

Where Wales has the edge over Scotland

If a pro-independence government is to have real legitimacy, then it should endure for more than a single electoral term and should be seen to improve the conditions in the country during that time. The best way to ensure that is for there to be more than one pro-independence party available, and for at least one of them to have a clear centre-right pro-business attitude. Then, even if public opinion shifts between left and right as overall economic conditions change, voters are not forced to choose between a single independence party that may not suit their economic aspirations, and one or more Unionist parties that might be a better economic fit.

In this respect Wales has a clear advantage over Scotland in that we have already developed a multi-party independence movement, with different parties that have clear distinctions between their policies. Not only that, but both the main parties are grass-roots parties, and have elected representatives.

I’ve written elsewhere about the essential difference between ‘grass roots’ parties, formed from the ground up to occupy a part of the political landscape that was previously unserved, and ‘top down’ parties formed around established politicians that fall out with their previous parties and try to form a new movement around themselves. The latter almost never succeed, and even when they do they seldom take on a life of their own separate from the personality who founded them. New parties that succeed in becoming established over the long term are almost always of the ‘grass roots’ variety.

In Wales, both Plaid Cymru and Gwlad are classic grass-roots parties, yet appeal to very different voters: Plaid to the left, Gwlad to the centre-right. Gwlad, the newcomer, has already broken past the barrier that most new parties never get past at all: having someone who’d never been elected before, standing under Gwlad’s banner, winning a seat from an established party. This happened when Gwlad’s leader, Gwyn Wigley Evans, won a county council seat in May’s election that had previously been held by the Liberal Democrats (and their Liberal predecessors) for over 100 years, as well as gaining community council seats in various parts of the country.

Scotland lacks this degree of roundedness: while there are other registered pro-independence parties, they are either of the top-down variety like Alex Salmond’s new vehicle, Alba, whose differences with the SNP are personal rather than political; or micro-parties like the Independence For Scotland Party and the Scottish Libertarian Party who have yet to win an election of any sort.

Therefore it can be said that, despite Scotland’s head start, Wales is in a better position to build an enduring independence movement which will ultimately succeed if it can only grasp the economic nettle.

Whether for Wales or Scotland, any aspiration for independence which doesn’t address the need to be economically independent – the need for the country to pay its own way in the world – is pie in the sky. Any independence party that doesn’t place this front and centre within its policy platform isn’t worth the name.

As I’ve written elsewhere, there’s no point denying that this is a difficult conundrum. Although it’s hard to find an independent country anywhere in the world that hasn’t performed better economically after independence than it did beforehand, in most cases this has involved some short-term economic pain in the beginning. Looking at the newly-independent countries of central and eastern Europe, the overriding lesson is that the countries that grasped the nettle and went for full structural reform quickly, such as Poland and Estonia, have performed much better than those such as Romania and Bulgaria who took a slower approach. Yet even the latter have grown very much more quickly than Wales has over the last 30 years.

The only way to avoid economic pain after independence, however short-term, is to ensure that the country’s budget is as close to being balanced as possible, with public expenditure closely matched to tax receipts. Without this, the newly-independent country has two equally unpalatable options:

The second option at least has the virtue that it makes the country’s exports more competitive, stimulating investment and helping the economy to recover, but it’s still a painful way of doing it.

The headline fiscal deficit that Wales has at present is around £14 billion per annum, or 20% of GDP. When this uncomfortable fact is raised, all sorts of half-baked responses are made to try to make it sound less bad or more manageable:

“Every country in the world runs a deficit” – this is true, but most countries only have deficits of a couple of percent. The EU requires newly-joining countries to sign up to adopting the Euro as their currency, which in turn requires a deficit of <3%. Even the EU countries with the highest deficits at present (currently Malta, Latvia, Greece and Italy) don’t exceed 8%.

“We’ll get a fair price for selling our water to England” – also true, but this will raise at most ~£400 million per annum, leaving another £13.6 billion to find from somewhere else.

A way to the sunlit uplands

The important things to remember are these:

Which is easy to say, but… how?

This is where we come to what we in Gwlad call the “middle column policies”, since our Manifesto is laid out in three columns: on the left, the problems that need to be addressed; on the right, our aspirations for post-independence; but in the middle, the nitty-gritty things to be done in the meantime.

The last thing needed is a detailed top-down economic plan for micromanaging every aspect of the economy: they don’t work. But we can:

And frankly, if we’re not doing these things, we’ll be in deep trouble even if Scotland votes Yes. So the sooner we start the better.

6 thoughts on “What Wales Should Do When Scotland Votes No”