I don’t buy this, for all sorts of reasons which I’ll set out here. But it’s important that we talk about this, because if (as I think is going to happen), Scotland votes “No” to independence for the second time in ten years, then Scottish independence will be off the agenda for at least a generation. In Wales we need to be prepared for this, and ensure that the Welsh independence campaign keeps focused and presses on.

I’m not a betting man, but for years I’ve been telling anyone who’ll listen that Wales will be independent before Scotland. I still think that’s true.

As my colleague Sian Caiach has written elsewhere, the assumption that Scotland is much further along than Wales in its quest towards independence really isn’t accurate. It is true that Scotland, having existed as an independent State prior to the Act of Union in 1707, already had more of its own institutions in place prior to Devolution; and this may explain why the earlier Devolution proposals of 1979 had much wider support in Scotland than in Wales. Yet we forget that throughout the 80s, 90s and early 2000s, Plaid Cymru consistently won higher levels of support in Wales than the SNP did in Scotland.

The two countries’ trajectories only really diverged in 2007, a time when Labour’s support was waning following ten years of rule in Westminster and they failed to win majorities in either the Scottish or Welsh parliaments. The SNP – led by Alex Salmond at the time – pulled off a stroke of strategic genius by accepting the support of the Conservatives to form a minority government, bringing Labour’s monopoly on power to an abrupt end. Plaid Cymru could have done the same thing in Wales, but shunned the opportunity and chose instead to prop up a minority Labour government.

At the time, polling data indicated that support for Scottish independence was around 24%. Even so, it had been in the SNP’s 2007 manifesto that they wanted to hold an independence referendum in 2010. When the time came, they were unable to gain enough support from other parties in the Scottish Parliament to legislate for a referendum, so the idea was put on hold.

Nevertheless the SNP-led administration proved popular, constrained as it was by the need to form cross-party agreement to most of its decisions, and in the next election in 2011 the SNP surprised everyone by winning an outright majority in the Scottish Parliament with its total share of the vote rocketing from 31% in 2007 to 44% in 2011 – gaining voters in large numbers from every one of the other parties.

[In Wales at the same time, Plaid Cymru were rewarded for their support of Labour by a precipitous decline in their vote share, dropping below 20% and being leapfrogged by the Conservatives.]

Once again the SNP’s manifesto had included a commitment to hold an independence referendum, and this time no-one in Scotland could stop them from doing so. Likewise the Westminster government of David Cameron found themselves unable to refuse permission, such had been the magnitude of the SNP’s electoral triumph, and the vote went ahead on 18th September 2014.

Interestingly, at the time of the 2011 election, polling support for Scottish independence hadn’t shifted much from 2007 – it still only stood at around 28% – and hadn’t shifted significantly above that level even by the beginning of 2014. Nevertheless it rose steeply during the campaign, and the final result of 44.7% in favour closely reflected the share of the vote that the SNP had won in the previous election.

While no doubt an achievement, that first referendum still failed on its own terms and Alex Salmond responded to this by resigning his post as SNP Leader and First Minister, handing over to his deputy Nicola Sturgeon. In the subsequent two Scottish Parliament elections (2016 and 2021), SNP support has remained at this level, with comfortably above 45% of the Constituency vote and 40% of the List vote each time.

Now the key point is this: in a multi-party system where a significant number of parliamentary seats are elected via the First-Past-The-Post (FPTP) system, 45% of the vote is enough to ensure total dominance – even Labour’s crushing landslide in the 1997 Westminster election was achieved with just 43%.

But it is still not enough to win a referendum.

At this point your author is somewhat in awe of Alex Salmond. If his intent all along had been to take a small party that had been on the sidelines of Scottish politics for decades, and to turn it into a totally dominant force which was in a position to shape Scotland in its own image – and then to pass that party in rude health to his chosen successor – then he really couldn’t have done it better.

But two things have happened since he passed on the reins, which in my view have put the SNP firmly on the wrong track.

The first has been to fall foul of Robert Conquest’s “Second Law of Politics”, which states “Any organization not explicitly right-wing sooner or later becomes left-wing”. Through most of their history the SNP steered a fairly centrist path on economic and social issues, to the point where the Labour Party in Scotland liked to mock them as the “Tartan Tories”. Under Sturgeon’s leadership, however, the party seems to have taken a definite turn to the left. As soon as the Scottish Parliament gained the right to do so in 2017, income tax rates in Scotland were set higher than in the rest of the UK, and economic growth in Scotland lags behind that in the rest of the UK (though nowhere nearly as badly as is the case in Wales). Scottish school performance has fallen sharply according to the international PISA rankings (though once again, not as steeply as in Wales), and drug abuse has ballooned to the point where the country has the highest rate of drug-related deaths in Europe.

In part this shift may be due to a large number of former Labour Party members joining the SNP, recognising that it is now the dominant force in Scotland and that Labour are unlikely to recover. It would not be surprising if this were to lead to the SNP governing more along the lines that Labour might have done, with the inevitable negative consequences of that. But it may also be a function of Sturgeon’s own political instincts. In any case, it seems clear that many of the opportunities offered by Devolution to build up Scotland’s economy and social fabric are not being taken, and in some visible areas Scotland is falling behind the rest of the UK.

Though to give credit where it’s due, the performance of Scotland’s NHS seems to have kept pace with the rest of the UK, in contrast to Wales where, again, it has declined sharply.

The second factor is (almost inevitably) Brexit. While in the 2016 referendum both Wales and England voted decisively in favour of Brexit, in Scotland the picture was very different: 62% of voters voted to remain in the EU. Immediately the narrative developed that, on account of its being within the UK, Scotland was being forced to leave the EU against its will – and the obvious solution to this was for Scotland to become independent of the UK so that it could immediately rejoin the EU. The SNP, and Nicola Sturgeon in particular, have been quick to seize on this argument, but there are some major problems with it: 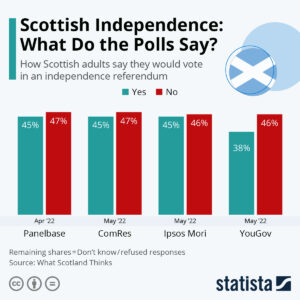 Taking these considerations together, it is far from being a foregone conclusion that a Scottish independence referendum can be won anytime soon. Polling figures seem to bear this out, with no significant shift in support for independence over the period since 2014 despite all that’s happened since then. Even so, the SNP have painted themselves into a corner, to the point where they are so committed to holding a second referendum that they can scarcely back down now.

Will the UK government save the day?

In view of the risks involved in having a referendum, the SNP may very well be secretly hoping that Westminster steps in and prevents one from going ahead. This would be a win-win from the SNP’s point of view: they’d be saved from the risk of calling a referendum and losing it, while simultaneously being able to play on the intransigence of Westminster as a further argument for independence in the medium term.

Westminster is also in the position of taking a high-stakes gamble: if they allow a referendum and lose it, then Scotland is gone; while if they disallow a referendum it will give the independence campaign a further boost.

Even so, with the noises that are being made at the time of writing by the contenders for the Conservative leadership, particularly Liz Truss, it may very well be that this is how things turn out.

But for now let’s suppose that one of these two things happens:

What then? For Scotland, and in particular Wales?

1. There is also the question of whether Scotland could meet the economic criteria. This is subtle. There are claims made in various places that Scotland would need to cut its fiscal deficit from the current ~9% of GDP to below 3% before it could join. That’s not quite true. 3% is the threshold for joining the Euro currency area, and while all new entrants are required to sign up to joining the Euro currency area in principle unless they negotiate a specific exemption (like Denmark has for example), they are allowed a transition period of unspecified length. Hence it seems that all Scotland would really need to do would be to make a fairly vague commitment to getting its deficit down below 3% at some unspecified future time. It seems that there is no definite criterion for fiscal deficit on entering the EU, though Scotland’s current deficit would put it among the fiscally weakest countries in the EU, worse than Greece, Italy or Spain. ↩

15 thoughts on “What Wales Should Do When Scotland Votes No”